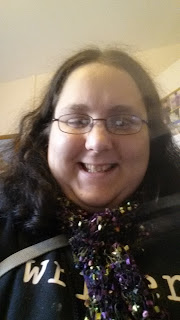 Today on the blog we welcome Children's Writer, Joey Paul. Today is the cover reveal for Joey's new book Dying Thoughts - Fourth Week. It is a pleasure to have you Joey. Thank you for answering the questions.

I am sure the readers would love to hear about you. Could you start by telling us a little bit about yourself?

Thanks Wendy. I’m 33, I live in the UK and I’m disabled. I’ve been writing since I was about thirteen, but stopped for a while and picked it up again when I was 19. I was first published at 22, and then at 28, I turned to indie publishing and released another story as an ebook. I love to write, love to read, and live with my best friend and her 10 year old daughter. I’m chronically ill with several medical conditions and use a wheelchair 90% of the time. I do love to get out and about and grab geocaches though, which is basically using expensive satellites to find Tupperware in the strangest of places!

You came to writing via a bit of a different route. What gave you the impetus to change careers to become a writer?
I'd always imagined that I'd become a doctor. From the age of five, I remember telling my parents that was what I was going to do. Obviously it didn’t work out! I went from school to college and lasted a term before my lung condition caused me to drop out. I decided that I would skip the learning and go straight into the working world. I got a proper job and worked in various positions before being hired at what would turn out to be my last traditional job. I worked there for about five months before I become sick with M.E and Fibromyalgia. I ended up going on long term sick and by the time I turned 19, I was medically retired. At the same time, I had to move back home because I couldn’t afford rent, and then went from there to live with a friend who’s parents would accept housing benefit. I was crushed at not being able to work, while also trying to juggle three chronic conditions. In the end, I decided that if I was going to be at home all the time, I was going to do something with my day. So, I grabbed a “book” I had written at thirteen, and tore it to pieces. I rewrote it several times and finally declared it finished. I then went on to write what would become my debut novel – Blackout – and was finished in ten days. The next book followed and it’s been like that ever since.

I know you’re a prolific writer. Can you give us a flavour of the books you have written?
I generally write in the young adult crime and mystery genre. I have seven books published, with my eighth coming up in a few weeks. Three of the books are part of a series, of which the next book will be the fourth. These also fall into the paranormal genre too. I’ve also written a general fiction young adult, a contemporary romance and two other crime and mystery books. They're usually all in the first person, or switching points of view, though one is third person. I like to tell the story from that angle so that the readers can see the world from the protagonist’s eyes.

I also have four other books completed, which will be released at the rate of one a year – which is my usual way – and I’m currently working on two more.

Are you able to tell us a bit about your next book without giving too much away?
My next book is the fourth in the Dying Thoughts series. They follow the life of Tara, who has a gift. She’s able to see the last moments of someone’s life when she touches something that belonged to them. She works as an informant with a local Detective Inspector, using her gift to provide him with clues as to who killed who and what evidence could be used to help catch them. She’s also solved a string of murders which everyone thought were deaths from natural causes. In this book, she’s faced with the possibility of not being able to save the person she’s closest to – her best friend, Kaolin. It’s a bit of an up and down story, and it allows for Tara to find new ways to use her gift.


Where do you get the inspiration for the books?

To be honest with you, life! I see things in my life that would make a good story. I see things in my friends and family’s lives that would make a good twist. I also have a very overactive imagination and it’s nice to be able to put it to some good use! I’ve always been a lover of crime books, and so writing my own seemed to make the most sense as it was something I am passionate about and find very interesting.

What draws you to writing YA Books?
I’ve been asked this before, and to be honest I don’t fully know. I think part of it is that when I wrote that first “book” – all 36 pages of it! I was a young adult reader. When I tore it apart and rewrote it, I was still technically a young adult reader. As time has gone past and I’ve grown older, I still find myself happier when I’m writing young adult. I don’t know if it’s because as an adult I have been fairly isolated because of my disability, and haven’t, therefore experienced as much “adult” life, or if it’s just because I'm comfortable in the young adult area now.

When you are not writing what types of books do you read? What would you say was the best book you have ever read?
I read books from a wide variety of authors. I’ll read crime, mystery, romance, paranormal, sci-fi, fantasy and more. Though my to-go genre in writing is crime and mystery, I do enjoy reading it a lot. It’s been the same way throughout my life. I still have young adult books on my goodreads 'to be read' list and I'll continue to dip in and out of genres. Now, if I had to pick just one book that was the best I’d ever read? That’s hard. I love the alphabet series by Sue Grafton, I love everything Harlan Coben has every written. I love Sophie Kinsella, Kathy Reichs, Karin Slaughter and the list goes on and on! Those are only the mainstream names, I have a fair few indie authors I also love, Jana Petken, Brenda Perlin, Lindy Spencer, yourself, Jalpa Williby and Jan Raymond to name a few of those! I can’t just pick one!

Who would you say was your favourite character in any book you have read?

Now, this is slightly easier, I love Kinsey Millhone from the alphabet series by Sue Grafton. She’s just what I want to be when I grow up (though some would argue I already have!)

A normal writing day for me begins in one of two settings. I'll either be in my office and therefore writing at my computer, or using my tablet and writing in bed or somewhere like a coffee shop. I spend the morning catching up on email, blog posts and any other admin duties and then focus on whichever book I’m working on that day. I write a chapter or two, before switching and writing two chapters of the other book. Some days I get four chapters done (though it’s rare!) and other days I barely get a page written. It really just does depend on my pain levels, my energy level and how much I’m inspired to continue the story.

If you could travel to any three countries in the world where would you go?
The Maldives, Australia and the USA.

The Maldives, because when I started writing at thirteen, it was where I planned to go to spend my money from the book sales (never happened, but boy can I dream big!)

Australia, because it’s so far away, I have friends there I have never met and probably never will and it’s just something I would love to experience.

The USA, because while I’ve been before, there are other places I’d love to see, like Hawaii and more friends to visit!

If you ever have a day off from writing exciting books what do you like to do in your spare time?

I love to go out geocaching! I try to do that at least twice a week, but I can’t go alone so I have to wait for when both B and I have a spare day or two. I recently went on an overnight stay away from home and we went on a long walk (I trundled in my chair!) and found a fair few geocaches. It was awesome!

Now that we are all excited about your next novel, when will it be available to buy?

The pre-order link for the ebook will be up on the 14th August and my hope is to release it at the end of August!