﻿
To buy from Amazon UK Click Here
To buy from Amazon US Click Here
Now I know these reviews are coming thick and fast at the moment but this book has had such an influence on the way I use twitter that I had to review it in the hope that it would also help others.
This is essentially a book about how to use twitter to develop your business but I have been reading it with my authors hat on. Obviously being an author is a business and I have had a great time exploring the ideas presented in the book.
The book takes you through all the steps of using twitter and for those who already use twitter there are advanced user sections, so something for everyone in here. The text uses case studies very effectively. Each case study is followed by a list of lessons which can be gleaned from the case study. I found this approach really helpful as the real life stories brought it to life and demonstrated how effectively twitter could be used.
The book covers ever aspect of twitter and includes chapters such as
amongst many others. It also includes a number of other sites which can be used to support your use of twitter. I have explored most of these and found them really helpful but a couple might take a bit of getting used to.
I am now following Mark on twitter (his twitter name is @markwschaefer) and his tweets are excellent and a real demonstration of his use of twitter. He also interacts with those who tweet about him which shows the use of twitter in action. Today one of his tweets linked to the following article
Global Experts Predict Social Media marketing Trends for 2013 which I have included as it is both interesting and useful. It is well worth following him on Twitter.
I have read many books about Twitter but this is far and away the best one. I would advise anyone who is serious about developing their online presence to buy this and use it immediately. You certainly wont regret it. It will be the best money you have ever spent.
﻿

Today I find myself in the unusual position of reviewing a book of poetry. Now those of you who know me and/or read my blogs will know that I am not a poetry type of girl. I'm more your murder mystery, blood and guts type of girl. So this will demonstrate to you the quality of this work that I felt I had to review it.

It is a short booklet, only 29 pages long, but I can assure you every word on these pages packs a punch emotionally. Some of the poems I enjoyed but others really spoke to me and several times I found myself challenged. One in particular "I have done nothing wrong" really spoke to me and challenged me about the way I live my life. I also liked "Childish Things" which remeinded me of being a child again and seeing the wonder in everyday things.

These poems are well thought out and most times are full of raw emotion. They speak to the heart, mind and spirit and obvioulsy come from a place deep inside the author.

This book can be read and enjoyed in one sitting. However, they can also be read and reread to refresh you spiritually and to challenge you in new and different ways

The proceeds for this book originally went to help projects in Darfur. Now the proceeds will help to fund a new Anthology of poems called beautiful. I would highly recommend you read this book.
Posted by Wendy H. Jones at 11:54 1 comment:

Close to The Bone (Stuart MacBride) 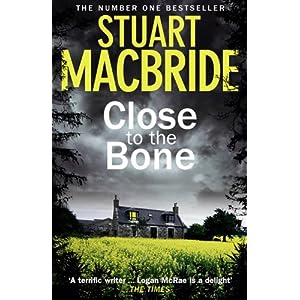 To purchase book from Amazon UK click here
To purchase this book from Amazon US click here
It's Christmas eve and here I am writing a book review. Why I hear you saying? Get a life Wendy. Well this book is so good I had to tell you all about it. ﻿
If you like Police Procedurals/Murder Mysterires which do not pull any punches then this is the book for you. Now for those of you who have not come across any of Stuart MacBrides's books previously my advice to you is remedy that immediately.
This series stars DI Logan McRae of the Aberdeen Police as well as a wide cast of equally lovable characters. I have to say that even some of the bad guys are lovable and that is hard to pull off in a series where the body count is higher than the GDP of a small country.
In this book Logan McRae is called to the scene of a murder where somone has been necklaced. This involves putting a tyre around his neck and arms, filling the tyre with petrol, setting it alight and waiting for the victom to die - slowly. A horrible way to go. To add to his troubles someone is leaving bundles of chicken bones, tied up neatly with ribbon, on Logans doorstep. There are also several more bodies littering both Aberdeen and the investigation making it difficult for Logan to know whaich way to turn.
This is not a book for the faint hearted as it is extremely graphic in places and has a lot of swearing. This adds to rather than detracts from the plot and I didn't find it offputting, but just be aware that this is indicitive of Stuart MacBrides novels.
The storyline pulls you along at a rattling pace with enough twists and turns to make you dizzy but it is all pulled very neatly together at the end making you wonder why you didn't know all along.
The characters are brilliantly scripted and in most cases eccentric. Logan McRae is so well written you can almost see him walking through your front door. The prize for the best drawn character has to go to that of DI Steel, Logans Boss. She is the PC Brigades worst nightmare and she uses Logan as though he were her personal skivvy. She is brilliant and has me laughing in every book.
This book can be read as a stand alone but to get the full flavour of the characterisation it is better to read them in sequence. I cannot recommend this book and all of Stuart MacBrides other books highly enough. He is a truly gifted writer.
I was fortunate to get an advance copy of this book as it is not released until the 17th january 2013. I have, however, given it a fair an unbiased review. Keep your Christmas money or Amazon Vouchers for this book. You will not regret it.
Posted by Wendy H. Jones at 20:34 No comments:

I know it's been a few weeks since I last updated my blog but there's a very good reason so please forgive me. If you read my last blog you'll realise I've been writing my first novel most of which was written during NaNoWriMo (National Novel Writers Month). So I am sure you'll appreciate that it's been a busy month with much of my time taken up writing. Yet what a great month it's been. I am pleased to report I met my Nano target of 50,000 words with some to spare and I should complete the first draft of my novel this week. Then the next stage of editing begins.

I can now tell you a bit more about my novel. It is a murder mystery set in Dundee, Scotland my home town. The working title is Murder in Time but if I'm honest this could change. The main character is Detective Inspector Shona McLean of the Tayside Police who heads up a team of disparate detectives in the CID. There are enough bodies for the most hardened of Murder Mystery fans and yet it is a book which could be read by anyone. The idea is this will be the first in a series of several books. Ideas for the next books are already swirling around in my head adding to the excitemet in this writers life.

I started by saying I am new to writing novels so being a voracious reader myself I have been reading some books to help me develop my craft. One excellent book is How Not to Write a Novel: 200 Mistakes to Avoid at all Costs if you Ever Want to Get Published.

This book is really about how to write a novel but takes a novel appraoch (excuse the pun). It points out pitfalls that novice novelists make and then demonstrate them by writing passages from a book. It was laugh out loud funny at times and I could see things I was doing although not to the extent of their parodies. I have to say that this approach worked for me as it was easy to see immediately what doesn't work. Each chapter covers a different mistake and then demonstrates it in a number of ways. These are the types of mistakes that have publishers throwing your novel in the nearest dustbin rather than straight to the printing press so better to avoid them in the first place. I appreciate this type of book may not be to everyones taste but for those who are able to have a little gentle fun being poked a them this is definitely a winner. To all you aspiring writers out there get this book you wont regret it.

Have I enjoyed writing so far. Theanswer to this is a catagorical yes. I love it. The characters daily become more real and they are taking on lives and characterisitcs of their own. Just when I think I know everything about them something pops up tha takes me by surprise. I certainly can't control them. It's been a whirlwind month full of highs and lows but I wouldn't swap it for the world. It certainly is a writers life.