Launch of my first fiction book by Heather Flack

Today on the blog we welcome author Heather Flack whose first novel is launched today under her pen name of Fen Flack. It is an honour to have her join us and tell us a bit more about herself and her book. Heather over to you.

The early 11th century is perhaps an obscure period of history, so why set a novel then? In 1982 I bought a cottage at Ribbesford on the outskirts of Bewdley, Worcestershire. In researching its history I discovered it had been “seized by the Danes” before the Norman Conquest. Intrigued, I began to read about the trouble times of late Anglo-Saxon England and discovered Edmund Ironside. At school I’d learned about Aethelred the Unready and Cnut (in those days Canute) but not the king in between these two. His story was inspiring and the circumstances of his marriage the stuff of novels. However, back in the ’80s and ’90s I was writing other things and Edmund went “into the freezer”.
I was inspired to write a set of novels set in Ribbesford itself beginning with its seizure by the Danes and ending with Harthacnut’s attack on Worcester in 1041. The themes were getting to know God, racial prejudice, healing and forgiveness. But I couldn’t find a publisher.
After 2000 I became more interested in factual local history. I was living in Kings Norton, Birmingham, at the time its buildings won BBC2’s Restoration 2004 and I wrote the guide books and history of the buildings. I still had a house in Bewdley and was contributing to the history of that town too.


I retired in 2007 and did an M.A. in English Local History. Part of my degree was a project on the early history of Bewdley and I succeeded in pushing back its origins some two hundred years. The paper had all the makings of a book, so I bought some ISBNs and got a local printer to produce it. I had the opportunity of speaking to the Bewdley Civic Society on the subject and sold 70 copies on that occasion. I was a published author!
Through some writing classes I built up a portfolio of stories about my local area. I published these as “Pieces of Wyre”, because all the writing concerned places in the Wyre Forest area (north Worcestershire). I found outlets for sales in the local libraries, tourist information centre and also the new Museum of Carpet in Kidderminster.
A more exciting opportunity emerged in 2012 when I was helping in the local secondary school with a project on medieval Bewdley. I worked with the English teacher to help pupils write fictional letters and wills about our town in that period. I wove their material together with mine to make “Bewdley under the White Rose”, which told the story of our town from 1448 to 1485.

Late in 2014 I was on a writing course and to my surprise, Edmund Ironside’s story came back into my mind and would not go away. I found I could not rest until I had done more reading and worked out a time line. Some books demand to be written and this was one of those. The text was complete in five months. The timing is perfect, as 1016 is a thousand years since Edmund was King.

Thank you for joining us Heather. Your book sounds fascinating and I am sure readers will be keen to buy.

A different type of book for you today Bookaholics. I will let the review speak for itself.

Mission at Nuremberg covers an aspect of war which is rarely discussed or even considered. The spiritual needs of War Criminals. It tells the story of Henry Gerecke an incredible man of faith who was called to do a job no one would envy. This was ministering to the the Nazi War Criminals who were waiting for execution. Henry could have turned the post down but he wanted to be obedient to the calling of f God. Many may query how he could do this job, but he did what God asked of him and reached out to these men. These men were men who were close to Hitler, including Hermann Goering.

This is not an easy read. There are a lot of facts and Christianity is discussed extensively. I found this to be a necessary part of the narrative, as the book would not be complete without it. To understand how Gerecke could do such a job, one first needs to understand his faith. Townsend does a good job of discussing this in a way which supports the book and yet allows for questioning.

This is a book which I feel all Christians would want to read. In fact many non-Christians may want to read it. It is difficult to say enjoy, but they would certainly find they would engage with it on a number of levels. Tim Townsend has certainly done Gerecke and his task justice. The book is eminently readable and one can follow the narrative and the discussions easily. It is a book which I would highly recommend.


As I say, a different book today bookaholics. However, I always promised you an eclectic reading experience. You can buy the book by clicking on the links below.

I was given a copy of this book from the publishers for review purposes. I was not, at any point, asked to provide a positive review. My review is based on my reading of the book. 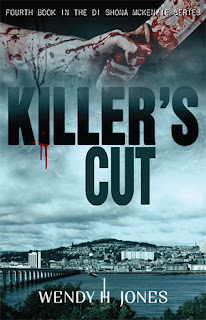 Good morning my Bookaholic friends, and a beautiful morning it is too. The sun is shining in Bonnie Dundee and I am going to spend the day reading. I want to start by apologising for the lack of blogs recently. Life has been frantically busy. I hope you will forgive me when you find out why.

Firstly I have been doing the final edits to KIller's Cut. I am excited about this book and I absolutely love the cover. I am sure you will agree that Cathy Helms of Avalon graphics has done a cracking job. As with all my books the bottom picture is of Dundee where the books are set. The top picture is indicative of the theme of the book. This will be released on 18th April at 6.30 pm in Waterstones, Dundee. Dundee in Scotland that is. If you are nearby then you are more than welcome to come along and help the book to get off to an explosive and fun filled start.

I have also been all over the country giving talks, attending conferences and even a few days holiday. During this holiday I even managed to spend time in a Jail. Before everyone thinks I am some sort of criminal mastermind, it was a tourist attraction. Inveraray Jail. So I am sure you can see that I haven't had a second to think about blogging.

So on to those new beginnings. As a crime writer I am usually thinking about endings - ending someones life. But April is a month of new beginnings for me. It's spring and that always makes me think about new life. My first new beginning is this blog. I will be back to bringing it out more regularly. That;s my promise to you. Another new beginning is the next book in the DI Shona McKenzie Mysteries. I have already started this and am enjoying spending more time with Shona and her disparate team. I love these books and it is truly a pleasure to write them. The final new beginning is that I have signed a publishing contract to write a series of mystery books for Young Adults. These will be called the Fergus and Flora Mysteries, and they will also be set in Dundee. I am thrilled to be writing these and look forward to writing Young Adult books.

So, as you can see it has been an exciting few months for this author and Bookaholic. What new beginnings have you had in your life recently? I am sure there are many. It would be great if you could share some of these in the comments below.

Now, I am off to do some reading. I will be finishing off a cracking mystery and starting a biography. I certainly have eclectic tastes in reading. That's it for now Bookaholics. See you all back here soon.