Books, Death, Drinking and Ducks, in the Jekyll and Hyde City 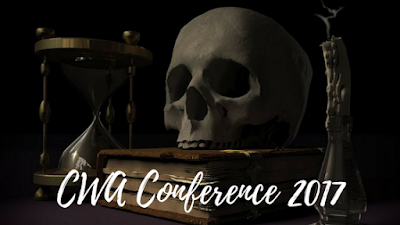 There aren't many occasions where all the words in my title come together. However, the Crime Writers Association pulled it off with a cracker of a conference, in Edinburgh, The Jekyll and Hyde City. 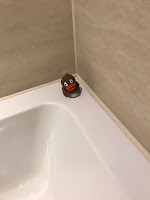 Let's get the ducks out of the way first. The conference was held at the Apex hotel and we all had a bonnie we duck in our bathroom. The first mystery of the weekend was that some of the delegates couldn't find their duck. Somewhat worrying but before long all fowl were present, correct and accounted for. The mystery of the missing ducks was solved.

To add insult to injury, I also had a bar of chocolate in my room and no one else did. This mystery was also solved as it was a birthday present from the hotel. What an amazing way to spend a birthday. 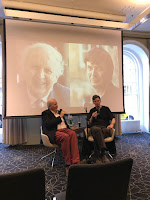 The conference kicked off with two legends from the Scottish crime world. Sorry I mean crime writing world. Ian Rankin entertained and delighted with tales of Edinburgh and why it is the Jekyll and Hyde City. They held a room packed with writers in the palm of their hand., proving they are not only talented writers but gifted public speakers. Both these writers, and their books, are very firmly part of Edinburgh's Literary tradition.

The opening talk was a triumph and it would be difficult to know how these could be bettered. However, the conference organisers had come up trumps with every last speaker. Professor Lorna Dawson kept us all busy scribbling with her fascination and useful account of how forensic soil analysis can be utilised to help solve crimes. Tom Halpin, ex Head of CID talked about investigating a crime, including the priorities. There were some surprises in there and it's certainly made me look at the police in a whole new light. 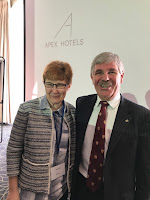 One of the highlights was meeting Professor James Grieve, who is also Major (Retd) James Grieve RAMC. As I am Major (Retd) Wendy H Jones QARANC her were a brace of Majors at the conference. It turned out we had served at the same time, but never in the same unit. It's a very small world indeed. Back to the conference and his talk. He gave the funniest talk on Forensic Pathology that I have ever heard. Was it also useful? You bet. He believes that a Forensic Pathologist is the physician to the bereaved.

The last talk of the weekend was by Tom Wood who worked on the World's End Murder. This had been an unsolved case from the 1970's and it was finally solved just a couple of years ago. This case was particularly poignant as the two young women who were murdered were the same age as me. I was celebrating my 56th Birthday at the conference, and they had died a horrific death at the age of 18.

It was also lovely to meet up with friends and make new friends. Alanna Knight and Alex Grey, two of my favourite authors were there. Not only are they fabulous authors, but genuinely lovely ladies. It is an honour to know them. I also had a fun lunch with Chris Longmuir and Caroline Dunford. I'm not so sure the hotel thought it was quite so much fun as we caused havoc with the order.


The organisers - Alex Grey, Aly Munroe and and Marianne Wheelaghan - certainly pulled it out of the hat for this conference. It is going to be hard to beat for next year, but I'm looking forward to it already. 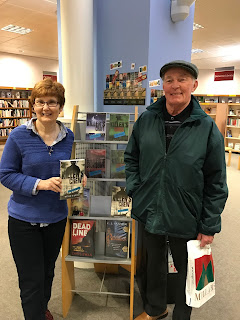 In Scotland, like many other countries, libraries have seen devastating cuts to budgets with libraries closing at an unprecedented rate. CILIPS, the Scottish libraries and Information Professionals have launched a Libraries Matter Campaign. I have been a strong supporter of this campaign and I would like to take this opportunity to tell you why.

I was signed up to a library card at the age of 3. Not unusual today, but unheard of then. As an advanced reader I soon worked my way through the entire children's section of my local library. By the age of 10 I was the proud owner of an adult library card. Thus began my love affair with books. Yes, I received books as gifts and there were always books in the house, but not at the rate I read them. A voracious reader, I could read two books a day. I had some spirited discussions with librarians who said I hadn't read my book and couldn't return it the same day. I had to prove them wrong by telling them the plot.

I joined the Royal Navy and then the Army as a nurse. This took me all over the world. The first thing I did when arriving at a new posting, was find the library. Postings abroad made it difficult for me to get books in English, but the library was always there like a comfort blanket. I started my career at Royal naval Hospital Haslar in Gosport. This becomes important later in my story.

On leaving the services, I worked in academia for many years, leading to publication in academic textbooks and journals. This led to a whole new career as a crime writer, and I am now a full time author. This would not be possible without libraries fuelling my passion for reading. I have five books in the DI Shona McKenzie Mysteries and one book in the Fergus and Flora Mysteries. A new series, Cass Claymore Investigates, is also underway.

Back to that posting to Gosport. I signed up to Gosport Library as an 18 year old. My books are now available to borrow in that library. It is an honour and a privilege to be in that situation.

The picture is me with my books in my local library. I have been borrowing books for 53 years. The gentleman with me, a crime reader, has been borrowing books for 80 years. So together we have clocked up 133 years of library borrowing. That is why I believe Libraries Matter. That is why I am fighting to keep libraries open. Don't let your libraries close, they're important on many levels.

You can find out more about CILIPS campaign on their website